Skip to content
Home/Custom Cables/How to differentiate between coaxial and optical fiber cable?
Previous Next

How to differentiate between coaxial and optical fiber cable?

How to differentiate between coaxial and optical fiber cable?

Optical fibers are waveguides that are utilized for sending optical (light) signals from one end to another.

Optical fibers are essentially built of glass or silica, which is a combination of core and cladding. The core is the internal part of the fiber produced of very pure silica glass that is encircled by a glass cladding. And coverage from external wear and tear, this complete fiber assembly is encased in a plastic jacket that is also known as buffer coating.

In the optical fiber, undoubtedly, the refractive index of the core needs to be more than the cladding to have a total internal reflection.

We know the principle of total internal reflection: when the light gets into a new medium from a denser one with the incident angle more than the critical angle. Then the incident ray gets reflected in the direction of the same medium.

This principle is employed for sending an optical signal through an optical fiber.

The ray is allowed to the incident the core, but because of the variation in the refractive index, the ray despite reaching the cladding reflects towards the core. These constant reflections produce the transmission of light from one end to the other. 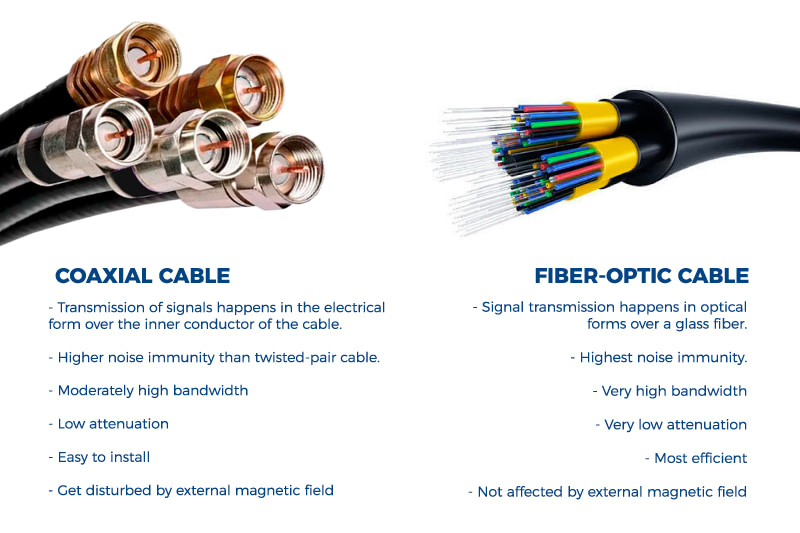 Coaxial cables, also known as coax, are guided media that are employed for transmitting electrical signals to some distances. Coaxial cables are essentially conductors that allow electrons to flow within it. Mainly copper is utilized in the construction of coaxial wires.

It is named coaxial because both; the inner and outer conductor have a common geometric axis.

The electrical signals needed to be transmitted through the coaxial cable are provided at the center conductor.

Also, the insulating medium confines the generated electric and magnetic fields within the conductor.